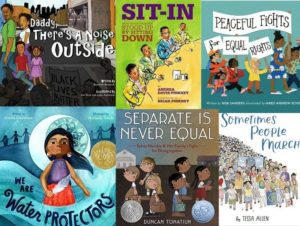 1. Sometimes People March by Tessa Allen
2020. Grades K-4.
“Marching is something people do together when they want to resist injustice.” This book, which shows groups of diverse people engaged in political resistance, highlights the reasons that people march, from systemic racism, to climate change, to the women’s suffrage movement. 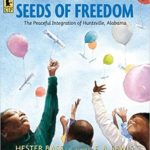 2. Seeds of Freedom by Hester Bass
2015. Grades 1-5.
In the 1960’s, the African-American community in Huntsville, Alabama, used creative nonviolent tactics as “seeds of freedom” to protest segregation and promote integration and equality. 3. Daddy, There’s a Noise Outside by Kenneth Braswell
2015. Grades PreK-3.
When two young children are awakened by noises in the night, they spend the morning talking with their parents about it, which leads to an important conversation about protesting, civil rights, and social action. 4. ¡Si, Se Puede! Yes, We Can! by Diana Cohn
2005. Grades PreK-3.
Carlitos’ mom is a janitor. Every night he sleeps while his mother works. One day she tells him that she and the other janitors are going on strike because they can’t make enough money to support their families, and Carlitos wonders what he can do to help. 5. Enough! 20 Protestors Who Changed America by Emily Easton
2021. Grades PreK-2.
Brief text is paired with dynamic illustrations to highlight some of the people who have catalyzed positive change in the US, from Ruby Bridges and Samuel Adams, to Jazz Jennings and the Parkland shooting survivors. 6. Harvesting Hope: The Story of Cesar Chavez by Kathleen Krull
2003. Grades 2-5.
When Cesar’s family fell into financial troubles, they became migrant laborers. Cesar’s experiences and observations of inhuman living and working conditions led him to start speaking out. He led a peaceful 340-mile march to protest conditions for workers and gained positive changes. 7. Sit-In: How Four Friends Stood Up By Sitting Down by Andrea Davis Pinkney
2010. Grades 2-6.
Sit-In tells the story of four young men who decided to take action against segregation by staging a peaceful protest at a Woolworth’s lunch counter.

8. We Are Water Protectors by Carole Lindstrom
2020. Grades K-3.
A young Indigenous water protector shares why water is sacred and warns that we all must become protectors against the oil pipelines “that will destroy the land.” 9. Miss Paul and the President by Dean Robbins
2016. Grades K-3.
Alice Paul, suffragist and women’s rights activist, organized parades, protests, a meeting with the President, and more to try to get [white] women in the US the right to vote. 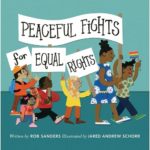 10. Peaceful Fights for Equal Rights by Rob Sanders
2018. Grades K-2.
This simple alphabet book leads young readers through a list of some of the many ways we can rise up and resist. 12. Separate is Never Equal: Sylvia Mendez and Her Family’s Fight for Desegregation by Duncan Tonatiuh
2014. Grades 2-5.
When Sylvia and her family move to a new community, they learn that they must fight for Sylvia’s right to attend the neighborhood school.

Get tips and resources for engaging in effective advocacy from our toolkit.